On the other hand, a fair percentage of small tour groups (mostly family tours) chooses car hire and drive themselves. They don’t book a tour bus in order to save money. Although smaller tour groups pay less for bus hire services since they only require a smaller tour bus, it still costs a bit more than car hire.

Meanwhile, it doesn’t make sense paying more for a small tour group for their coach tour in South Africa. Larger tour groups with extensive tour needs, have a large tour budget. Be that as it may, they are oftentimes surprised at the cost of bus hire in Johannesburg, since they don’t know what what it costs.

This page is intended to clarify the many questions we receive from Customers, concerning bus hire prices and the associated tour costs in Johannesburg.

The How Of Pricing

Bus charter companies, like any business must take into account running costs. This being fuel, salaries, insurances, vehicle maintenance, license renewals and finance costs. These elements are included to finalize bus hire prices for any particular budget year.

Above all, we use a combination of the following tools while preparing bus hire prices:

The above tools are a combination of science (with accounting principles) and art, which is an ongoing cycle of learning.

However, we deal carefully with tour budgets and bus hire prices. It requires a knowledge (the science) of what is needed to make a tour possible. Bus hire prices is made up of a combination of science and art methods.

In Coach Charter monthly meetings hot debates are welcomed on bus hire price structures. This is based on Customers’ responses on bus rental prices. We see some feedback like “I don’t want to buy the coach, just want to rent the coach in Johannesburg for a tour,” OR the best comment being “how do you guys sleep at night after putting these kinds of costs?”

The art, science and averages of prices

The bus hire Johannesburg pricing structure is neither an art nor a science. There is one group of staff members (the creative ones), who defend it is as fact that it is an art. Other Consultants swears allegiance to it being a science. Either way, at the end of all the debate the Customer needs their bus hire prices. Essentially a tour budget is provided to them to be included in their tour cost planning.

The science method is used to calculate every aspect of bus hire services in Johannesburg. Distance to be travelled, tour driver service hours costs, meal allowances and general expenses pertaining to the tour are taken into account.

The art method is used by experienced Consultants who relies more on the law of averages. They already have in-depth knowledge of the coach rental pricing elements.

"The Law of Averages states that the supposed principle that future events are likely to turn out so that they balance any past deviation from a presumed average."

The Rate Per Kilometer Rate (RPK) is a quick estimation and application of costs to any particular vehicle be it the 7 seater touring minivan or the 32 seater luxury coach and the 60 seater conference coach.

Included in the RPK is the fixed and variable running costs pertaining to the coach. So the RPK of a coach is basically the budgeted income of a luxury coach divided by the estimated total kilometers to be travelled for that budgeted month (a/b=c). There exists many practices in the industry, but this is typically the reasoning behind the exercise.

A bus charter company would then know and understand that it cannot allow its luxury coach to operate or render a service for lower than its budgeted RPK rate. That would be disastrous in the long run and only increase pressure on taming expenditure. Furthermore, providing luxury coach services for tours in Johannesburg is a costly exercise.

Valuable lessons from the past

If we consider a period of 2007-2008 (during the credit financial crisis of 2007-2008), bus hire prices were very low, but was of course still relative to existing overall tour budgets at the time.

Tours to Johannesburg, South Africa were still taking place but unfortunately, due to the US/Global financial crisis of 2008 (when the effects were felt in South Africa) most Tour Operators implemented a fuel surcharge, or a buffer of some sort to cushion the increase in the fuel burden. Other Operators fought for survival and strategized to reduce their prices to increase tour volumes and to keep their luxury coaches moving everyday. But the fuel costs brought them to their knees. The fuel costs were heavily weighted and burdensome for all Tour Operators. Coach Hire Companies had to wait it out and weather the storm as booking cancellations increased.

But enough of that sad story. Take a glance at the following bus hire prices grid for Johannesburg in 2007-2008. 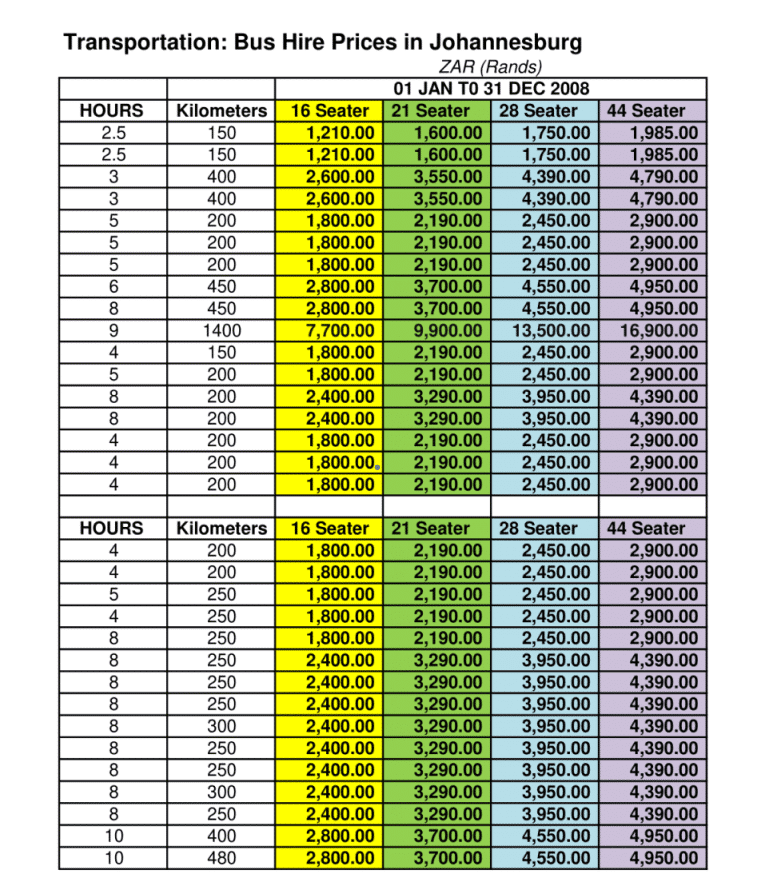 How pricing has changed

Take note of the hours of service column, and then the kilometers (or convert to miles) column to give you an estimated understanding of hours of service and distance. Interestingly, a basic 8 hour service covering an approximate 200-250 kilometers (150 miles) on a 44 seater luxury coach in Johannesburg for hire was only R 4,390.00!

Costs have more than doubled in a 10 year cycle since then for the same approximate size and coach. However, 44 seater luxury coaches are not that popular during this day and age. The 52 seater luxury scania higer and the 56 seater luxury irizar coach in Johannesburg have more predominantly replaced the old faithful. Clients’ needs have evolved and become more sophisticated and as such the tools we use as a Bus Hire Company in Johannesburg had to evolve and be upgraded as well.

Pricing for each city

Bus hire prices in Johannesburg are considered to be slightly higher, compared to the smaller cities namely Cape Town, Durban, Port Elizabeth and Bloemfontein among others.

The graph below highlights the approximate cost differences between Cape Town, Durban and Johannesburg, therefore visually it is clear that Johannesburg is the higher of the three cities. 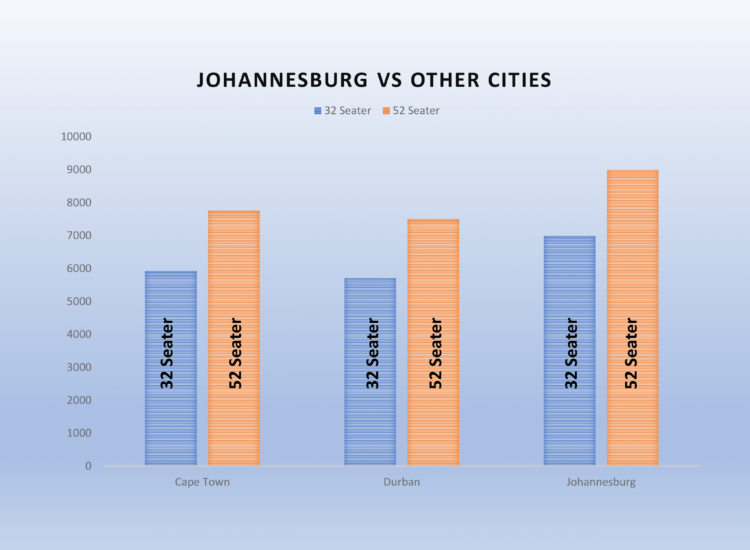 The Johannesburg Stock Exchange (JSE) is based in Johannesburg. Large corporate companies have headquarters in the region, with smaller offices in the other cities. Domestically, more work seekers travel to Johannesburg in search of better job prospects and higher salaries. The reason is that many believe that “Johannesburg is where the money and prosperity is.” Johannesburg is to South Africa what New York is to the United States of America.

"Johannesburg is to South Africa what New York is to the United States of America."

Fuel increases and its effects on bus hire prices

Fuel costs is still the achilles heel of bus charter companies. We have a love-hate relationship with fuel drowned in sorrow. Without fuel in the coaches we cannot render our services. It therefore forms a big part of running costs. This must be closely monitored on a continual basis.

The majority of bus rental companies has a fuel levy policy in their terms and conditions. It allows us to levy a fuel surcharge should the cost of fuel increase unexpectedly.

Fuel Levies and its effects

For instance, we saw this happen during the 2007-2008 financial credit crisis, whereby the fuel price was severely affected. Tour companies felt the pressure, and unfortunately the increased fuel price pressure was shifted onto the shoulder of the tourist. Many tour cancellations ensued as a result.

Furthermore, two years later the 2010 FIFA World Cup commenced in South Africa. Most coach charter companies in Johannesburg recovered beautifully as a result of the high profitability, which the prestigious competition brought. The World Cup placed such a huge demand on luxury coach hire services in Johannesburg and South Africa as a whole.

The following table depicts the gradual increase of fuel in South Africa over a 10 year period from 2007 – 2017. This was beautifully explained through an article at Business Tech South Africa. 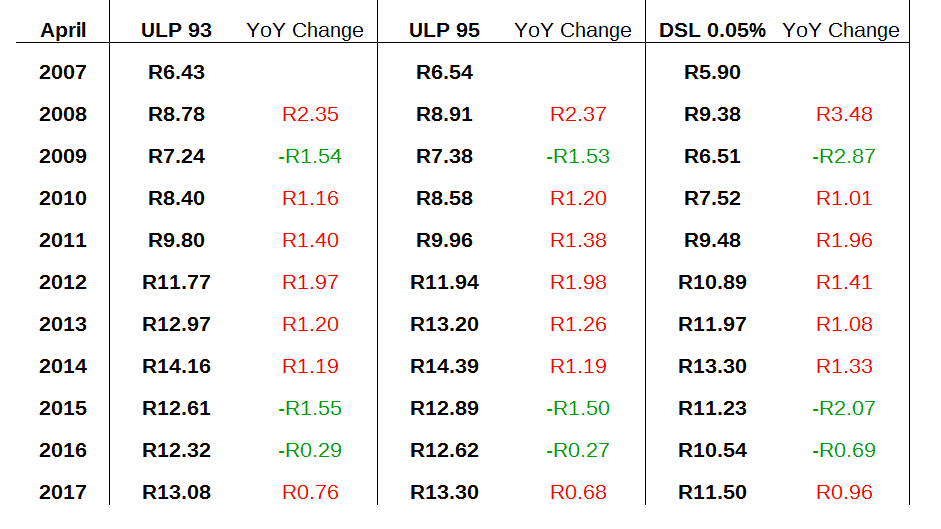 Consequently, even though fuel increases are inevitable, some customers protest an annual general increase in bus hire prices. The increase is more or less between 5-7% on any given year. Where possible bus hire prices have to remain unchanged in order to remain competitive and also fair to customers.

The importance of fuel costs in bus hire pricing

Gradually, business gets more expensive and so in the beginning of the year 2020, we were paying a diesel price of R 16,42 per litre at the pump. Due to the corona-virus lock down measures, nobody was hardly purchasing any fuel. As a result the pump price decreased to R 12,90 per litre.

A deeper fuel study would be utterly laborious for you to read. On average a luxury coach in Johannesburg travels an estimated minimum of 7,500 kilometers and a high of 15,000 kilometers per month. This equates to approximately R 184,725.00 worth of fuel for that month (based on the median of the kilometer range provided above). This is an extreme scenario as there are companies who travel way less than 7,500. In certain scenarios, much more kilometers are clocked than the high mentioned above.

The fact remains that fuel costs determines how fair our bus hire prices are for Customers. New start up coach rental companies in Johannesburg beware, enter the market at your own risk. You must be prepared.

"Sadly, a bus charter company’s running costs only increase, and then yet, it still increases more. Expenditure can be managed, but the gradual increase of fuel is beyond control."

The tourism industry is made up of peak and off-peak seasons. In fact, you will discover this in the different examples of bus hire prices in Johannesburg. Bus charter companies enjoy the benefits of peak season (its busiest period), and then again from mid August to mid-December each year. Customers enjoy the off-peak pricing benefits (low pricing).

Off-peak pricing benefits for the customer

From mid April to mid August the long off-peak period take places. Consequently, tour operators have to reduce their prices in order to keep the coaches on the road. Travel Agents and Online Travel Agents (OTA’s) usually take advantage of the off-peak season in South Africa.

Most tourists do not enjoy the cold and wet weather in South Africa. Consequently, the lowest part of the off-peak season is in the heart of winter in South Africa. This is between June and August each year. In other words, this is the toughest period of the off-peak tourism cycle. Finally, the bus charter prices in Johannesburg has to be reduced in order to get bookings.

Insurances, fuel and staff salaries remain constant during off-peak season. Annually we adapt to the tapering off of demand for products and services during the winter period.

Therefore, we reduce our rate structures in order to entice and generate interest in our products and services. In so doing, out of the pool of diminished demand during winter, we can extract the maximum return for our reduced pricing strategy. This allows the coach fleet to work and earn an income in order to pay the costs of the business. Likewise, hotels and safari lodges adjust their pricing during winter in order to receive bookings.

Above all, the off-peak season is the same each year. Therefore, our customers enjoy the benefits of reduced rates during the winter off-peak cycle. As a result our customers can maximize their tour budgets.

In conclusion, bus hire prices in Johannesburg are made up of many factors. Customers receive value for money service. The best time to travel to Johannesburg is in the winter off-peak season. Savings are enjoyed during this period. This is between June through August each year.

For more information simple email our Team at info@bushirejohannesburg.co.za

How can we help you?